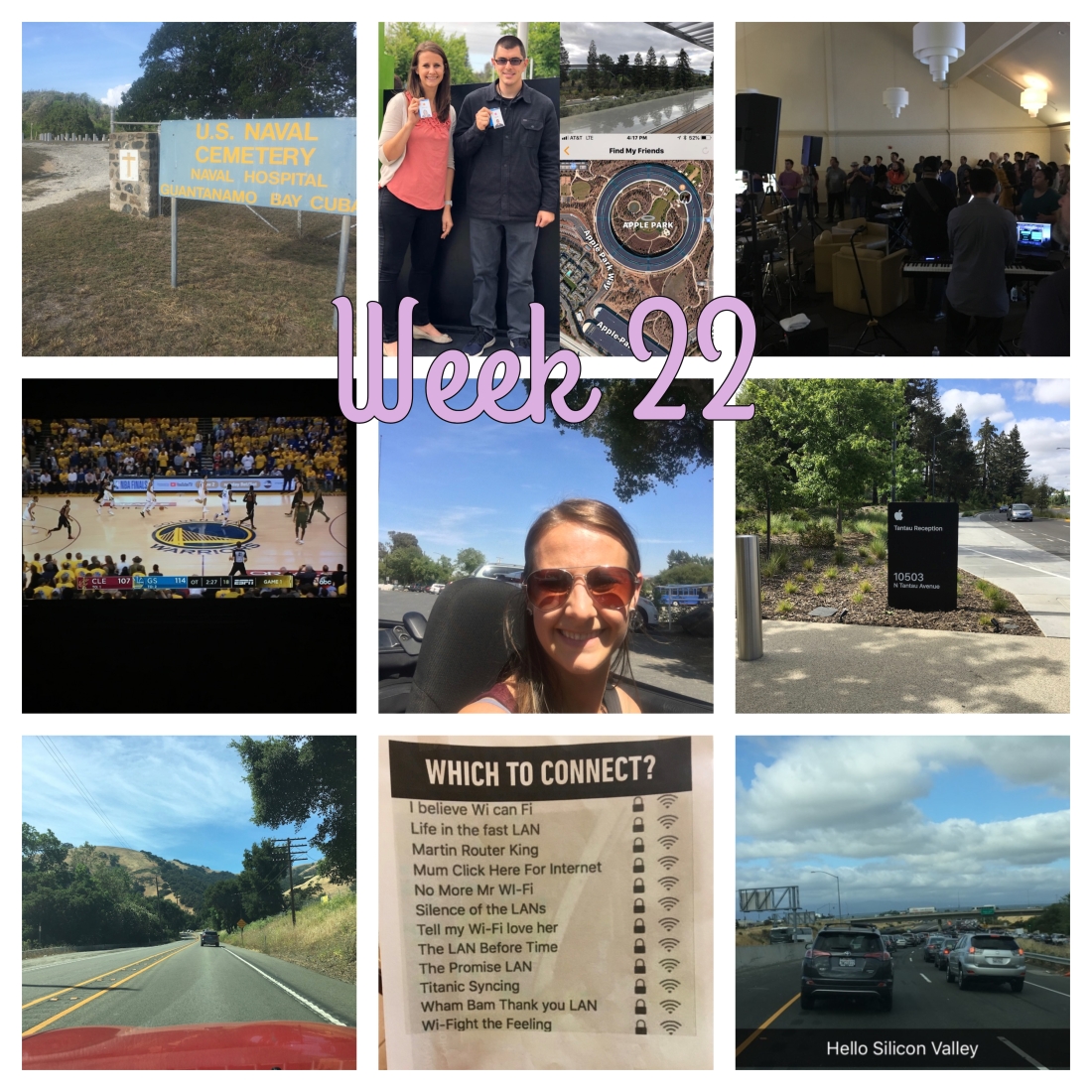 The challenges of living in the Bay Area. Traffic. Cost of living. Not great public transit. Thankfully, I moved this week to the room I will be renting for a little while, and it’s only 15 minutes from my office. Yay! I was driving about 1.25 hours in the morning and 2 hours on the way home, back to Pleasanton, which is 23 miles away. I drove this morning to church, and it took 40 minutes. As it should be.
I saw this article, and thought it was crazy how many people are likely to move out of the area, since it’s just so unaffordable to live here. “Forty-six percent of Bay Area residents surveyed said they are likely to move out of the region in the next few years. The median sale price hit $850,000 this year.” For an average home!
https://www.mercurynews.com/2018/06/03/nearly-half-of-bay-area-residents-say-they-want-to-leave/

An update from my side is below, as we wanted to take this space to share Brian’s experience of Memorial Day this past week in GTMO.

This was the first memorial day where the gravity of it all hit me. It’s quite different having a ceremony to remember the fallen while living among those who volunteered to lay down their lives if called upon. It saddens me to see how commercialized the day has become. My sole memory of Memorial Day as a child was that it was a day off from school. That morphed into a day that marked the beginning of summer and school almost being done. At some point I started noticing the token statements made by announcers at sporting events, church, school, or anywhere else where it made sense to make a gesture. The words never felt genuine, just another thing that had to be done because that was the price of having a day off. These days it’s gotten even worse, with rampant commercialism and attempts to capitalize for capital gain.

And then I move to an oversees military base. I start to live with families who are separated for months on ends during deployments. I hear statements such as “I don’t like GTMO very much, but at least we aren’t getting shot at or shelled”. The possibility that their family may be featured in the next Memorial Day “token” segment on local TV is an everyday reality for the families here. Even if their family is currently in a safe location, they have countless friends deployed in Iraq and Afghanistan, and have their own unknown future deployments lurking. The military community is strong. Living here, it’s not hard to see how their common struggle is foreign to most civilians – which only serves to tighten their circles.

This morning I went to a memorial service at the military cemetery here in GTMO. It’s rather small in terms of cemeteries. There are a few graves from service members dating back to the original occupation by US forces – the site of the cemetery is a battlefield itself from the Spanish-American War. There were some headstones for those killed in action, but a vast majority were from those who died while on base. Some were Cuban exiles who could never return to their home country, and so were stuck on base. It’s a little eerie because there are more elder Cubans that we have met, who can not leave the base due to politics, and now understanding their situation a little better when I’ve seen the place they will inevitable be laid to rest. A lot of other graves were for infants who I would assume never survived childbirth. The number of these headstones was truly saddening.

What stuck with me the most from the service was the speech by the Joint Detention Group Commander – I don’t recall his name. At one point he started listing off the names of 7-8 men that he personally knew that had died during our wars in Iraq and Afghanistan. He said he could tell stories of each one – going through training together, hanging out, etc. Sacrifice isn’t just a number that you see on the news occasionally “this death brings the number killed in Iraq and Afghanistan to ____”. While we all know that each number represents a story and a grieving community, it never sunk into me until I heard the actual stories from real people. We’ve become so disconnected from the reality behind the news reports, that it’s hard to internalize the true nature of the information we hear.

After the service I went to my quiet spot at the beach and started thinking through all of this. At one point I saw a Washington Post article about one of the most recent casualties in our ongoing war. The detailed how the family coped with the loss. The truly remarkable part came when the family declared that they still believed their son died for a noble purpose. Their beloved child stayed courageous in the face of fire to protect his friends, and it ended up costing his life. He was sent thousands of miles away to protect a people they had never met, and to confront the forces of evil as they saw it. It was obvious to them that their sons actions didn’t make the US any safer, but it was to the benefit of the Afghan people – and why would that be any less valuable? In the end, the fallen soldier’s parents devoted their limited characters on their son’s headstone to saw “Well Done”. How simple, yet powerful.

Memorial Day can teach us many things – service, sacrifice, honor. The message for us today is that the “full measure of devotion” so willingly given should not be taken lightly. Ours is a country that values freedom for all, a right for peace and prosperity, and the principle that all people are created equal – no matter the color of your skin or the place of birth. We have over a million service members devoted to serving this nation and preserving its values. The question we grapple with, but the pivotal question that must be answered, is what exactly do we want those values to be? Are we willing to commit our own reputation, finances, and even our lives in pursuit of becoming an honorable society. Can we become the light on a hill, staying true to ourselves and our commitments, where when one of our soldiers falls valiantly in its defense we would have no hesitation is proclaiming “we as a united people affirm our commitment to the cause for which you gave your all”. “Well Done, Good and Faithful Servant”.

For Amanda:
Ramping up at work, struggling with not sleeping great still, which causes some pretty good fatigue during the days. Went to a Workplace Worship night, where multiple tech company’s Christian employees gathered together to sing and share stories about being Christians within our organizations. It’s finally gotten warm here (thank God! I was FREEZING in the 55 degree weather!), and since I have a little convertible now, I drove through Niles Canyon area with the top down on Sunday to relax. Fun! Watched the Warriors win (such a good basketball game!). Got moved into my Cupertino room, so no more fighting traffic. My friend Brock came to visit me during the week, and we got to go into the new Apple Campus. Every time I go, it blows my mind. It’s just so beautiful. If you can, come visit it! (If you’re not an Apple employee, you’ll have to wait a few more months to go inside, as they’re not letting regular visitors inside yet). But you can go to the visitor’s center and take pictures (where our picture are from). See Brock’s quick video below with some pictures of the outside.

View all posts by Amanda Coox